Skip to content
Olivia Laing delicately describes the haunting loneliness afflicting over 100 million citizens across the world, in her latest book – The Lonely City. If you’re a lover of art and you’ve experienced engulfing loneliness and heartbreak, this book is definitely for you! Laing, a native of UK and works as a journalist in New York City, categorizes this loneliness uniquely experienced by those of us living in larger urban areas, where it is rather easy to get lost in the city’s hubbub. It’s not the usual one-off kind of loneliness that impacts us sporadically over life – the loss of a relationship, the loss of a close friend, but the one that persistently haunts us and removes us from the penetrating connection from the outside world for long periods of time. 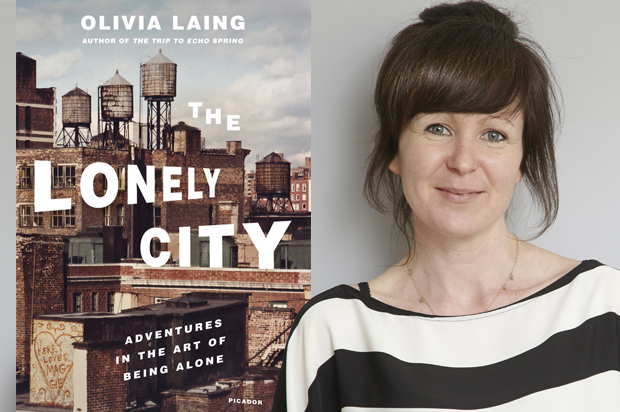 Laing moved to Manhattan, New York and found herself crushingly alone in the sea of humanity after the relationship she was counting on fell apart. Surrounded by towers of concrete and strangers residing within these towers, Laing peered into their lives through a small window of her lonely Manhattan apartment. Hoping to find intimacy in the eyes of the other, Laing pens a deeply penetrating memoir about her experience as a lonely writer and her effort to find an antidote to loneliness.
Laing meanders through the lives of four major 21st century artists who explored loneliness through their mixed media art work – Edward Hopper, Andy Warhol, David, Henry Dranger, and David Wojnarowicz. The life stories of Edward Hopper and David Wojnarowicz were particularly interesting for me – but I encourage other readers to find a voice in the life’s of these artists. 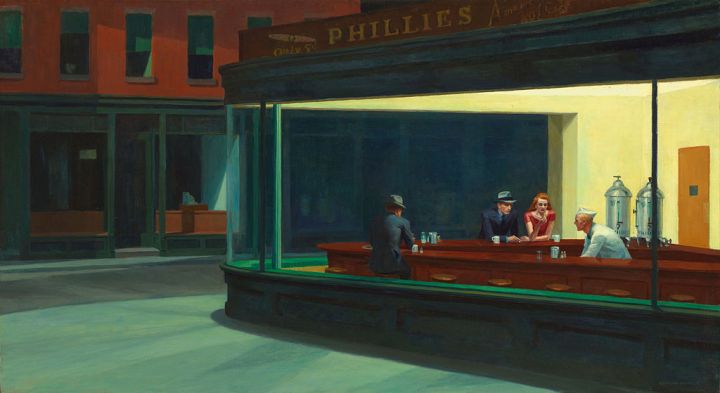 Attribution – Summer Interior By Edward Hopper – 1. artchive.com2. The AMICA Library, Public Domain, https://commons.wikimedia.org/w/index.php?curid=2348488
Hopper is described by Laing as a “reluctantly aware” lonely artist, who knew he was painting interpretations of his life, but was never at ease accepting the tag of a lonely man. He was married to Josephine Niveson, who spent her life struggling to carve a name for herself as a woman artist in America.
Laing highlights the constant turbulence and stifling struggle for power between Hopper and Jo – and the unanswered conundrum – why Jo, being the advocate for women’s rights and equality continue putting up with the constant humiliation Hopper put her through. According to Laing, not only did Hopper sneer at her art work as did the purveyors of the art world, Hopper vehemently discourage Jo from pursuing art and basic dignity – shunning her when he wanted, and morphed her into an unrecognizable model for his exquisite rendition of artistic imagination. In fact, Jo was the model in almost all his paintings including Nighthawks.
Hopper and Jo met in their 40s, perhaps both unsure if they would meet anyone else at that point in their lives. They also served as yin and yan – perfect opposites, as Laing describes,

“…though they were as a couple deeply enmeshed, their personalities, even their physical forms, were so diametrically opposed that they sometimes seemed like caricatures of the gulf between men and women.” – Olivia Laing

In fact, their relationship replete with “unexpressed frustration, unmet desire, violent restraint”, seems so well-preserved in the Room in New York.
Hopper stated he “declared” himself in his paintings, in essence stating,

“…barriers and boundaries, wanted things at a distance and unwanted things too close: and erotics of insufficient intimacy, which is of course a synonym for loneliness itself.” – Olivia Laing

Laing conducted phenomenal research about the life of David Wojnarowicz – a prominent painter, filmmaker, writer, and activist who rose to fame with his Arthur Rimbaud series. David was born in New Jersey and had a particularly violent and abusive childhood at the hands of his father. David was beaten with dog leashes, two-by-fours, his sister slammed on the pavement with no one to hear the voice or the pain.
The suffering of a child just washed away in the rain, as life continued its indiscriminate abuse –  David was raped brutally as a young boy and eventually ran to away New York to live with his estranged mother. Here, he had to hustle his way through life to feed and live. He went hungry many a nights and often had to find refuge in the arms of strange men who were sometimes kind and other times just used him sexually and abandoned him.
Unlike many of us who may easily lose our balance in such a violent and ungrateful environment, David managed to find his soul in art. He drew, he painted, he learnt how to photograph and turned his anguish into artistic expression. David started to find his place in the community and acceptance in New York. But there was always the lingering fear of being discovered – the shame and the anger of being different from all others. He talked about his experiences with Keith Davis, in a taped conversation,

“there was no way I could relate them to anybody in a room full of people at any party anywhere. The sense of carrying experiences on my shoulder, where I could sit there and look at people and realize there was just no frame of reference that was similar to theirs.”

Quoting from Close to the Knives, David said,

“I could barely speak in the company of other people. There was never a point conversation at work, parties, or gathering where I could reveal what I’d seen.”

David found company and often affection in the arms of men who themselves were trying to find their identity in New York. Unrestrained sex and success – both came to him with time and living openly as a gay man in San Francisco made his spirit happier and healthier. His work was remarkably sexually deviant, yet a clear expression and acceptance of his past. 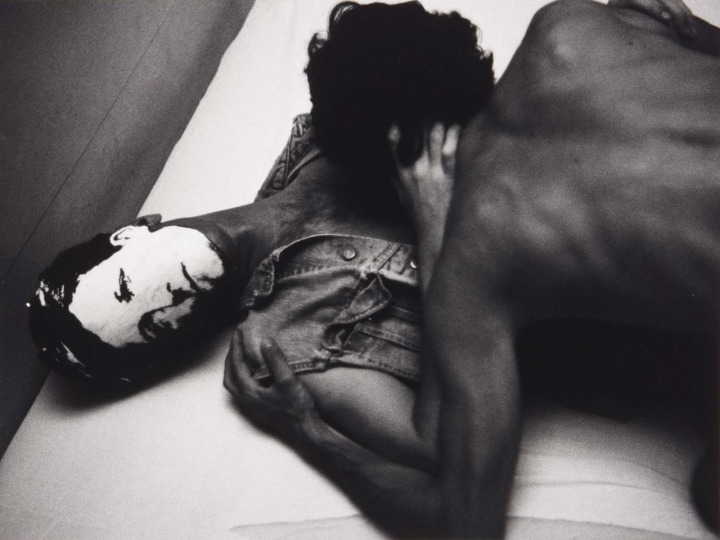 Attribution: David Wojnarowicz, Arthur Rimbaud in New York (1978-1979) – Arthur Rimbaud
1980s and 1990s was also the time when the country was deeply intolerant toward the gay community and AIDS was on the rise. As the mysterious virus silently killed many of David’s friends, members of the gay community rose their voice against the government’s and social apathy. The Catholic Church and the government institutions had denounced homosexuality (major western countries like US and UK) and patients suffering from AIDS didn’t get the care and support services they needed.
David voiced his anger against the system. He marched for the right of every community member suffering from AIDS. Instead of allowing AIDS to happen to him silently, he observed the crushing impact the virus had on his soul,

“To place an object or writing that contains what is invisible because of legislation or social taboo into an environment outside myself makes me feel snot so alone, it keeps me company by virtue of it’s existence. It is kind of like a ventriloquist’s dummy – the only difference is that the work can speak by itself or act like that ‘magnet’ to attract others who carried this enforced silence.”

David died at the young age of 37, trying each day to shed the garb of loneliness as the unforgiving virus in his body ate this spirit and decency away. When he passed, hundreds of mourners gathered in the East Village, walking with a black banner that read in white letters:
David Wojnarowicz
1954-1992
Died of AIDS
Due To
Government Neglect
After David’s passing, ACT UP organized the Ashes Action march to George Bush’s White House and emptied the ashes of AIDS victims on the White House laws. David’s ashes were scattered by his partner Tom. Over the years, the dialog around AIDS and HIV grew more tolerant particularly on the East and West Coast – but we have such a long way to go!
Not enough good things can be said about The Lonely City and the personal stories detailed with such responsibility. Laing is so effective at transitioning from personal stories about authors to humanizing abject loneliness.