Amitabh Bachchan confessed on “Frankly Speaking” this weekend, that he too is a fan of Arnab Goswami and watches the Newshour every night. Arnab has always been fierce and unstoppable, and delivered yet again by pinning Mr. Bachchan on Bollywood’s elitist, careless and selfish attitude, and Mr. Bachchan’s own reluctance to speak up about issues affecting the common man. Mr. Bachchan was on the defensive and I was frankly let down by the forced diplomacy and lack of valor on his part.

Mr. Bachchan is the most successful actor who has continued to grace the Indian celluloid since 1970s. He has also established his reputation as the most elegantly spoken and diplomatic representative of the film fraternity. Mr. Bachchan raised is voice against the ineptitude of Bollywood on issues related to censorship, however continues to remain mum about Bollywood’s bad behaviors. Case and point, Salman Khan’s hit-and-run case, and Sanjay Dutt’s TADA arms case. Just like the rest, Mr. Bachchan didn’t call out Salman and Sanjay for their inexcusable behaviors. In turn, he continues to support them stating they are good human beings – a quality largely missed by the media and common people. 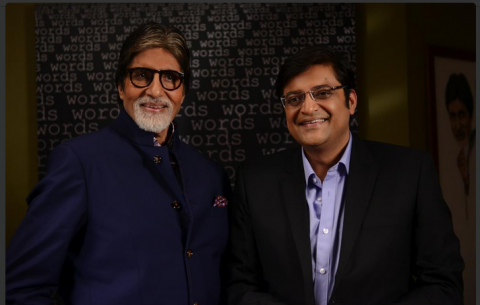 Arnab, who is known to lambast and plaster his interviewees didn’t disappoint. In fact, he called out Mr. Bachchan for not using his stature to speak for social change – like Aamir Khan has. In fact, his own wife Jaya Bachchan and his friends in the film fraternity have positions as Members of Parliament, and Members of Legislative Assembly – positions which allow them to affect social change. However, just like Mr. Bachchan, they too don’t seem to be particularly concerned with the plight of the poor. Neither do they want to be a part of the political debate or attend the Parliamentary proceedings on a regular basis.

Mr. Bachchan did realize the part he’s playing in the elitist attitude of Bollywood. Yet, he’s not ready to do his part in changing the perception in the media or amongst common people, at least not yet. Here are some tweets he sent out defending his answers:

T 1880 – Pasted left right and center by Arnab Goswami .. bruised, black eyed and all .. watch over the week end, how he shall destroy me !!

T 1881 – I do not possess adequate knowledge to comment on all the issues that plague society, on politics, on controversies et al .. !

T 1881 – in interview I shall be unable to comment said topics. They will make good copy for a few days, and over ! Journos refrain please !

T 1881 – That response to media will enhance profile of journalist maybe .. for me it shall haunt me a lifetime ! I beg to be left alone !

Sadly, Mr. Bachchan tried to justify why he doesn’t make social commentary about important issues concerning the common citizen. He stated making social or political statements makes him and his fraternity vulnerable to criticism, makes him nervous about facing the camera from the stress due to criticism, and disturbs his peaceful life. The rest of us do not have the option of cocooning ourself from criticism be it about our personal lives or professional lives. I am at a loss for words as to why Mr. Bachchan thinks he should be exempt in such a case?

I was disappointed to hear his explanations excusing Salman Khan and troop’s callous behavior during the SAIFAI controversy, defending the fraternity for standing by mega Bollywood stars, and living in the privileged bubble disconnected with larger human problems.

Strangely enough Mr. Bachchan comes across as a jittery stalwart. He seemed unsure about his own public image and seemed to be interested in only enjoying the best of what fame and success offers. He didn’t want to take on the establishment, or even comment on social issues. Mr. Bachchan seemed very cagey about being associated with political and personal controversy. He’s afraid of unseen consequences, basing these fears on prosecution experiences from Bofors.

Mr. Bachchan’s had a colorful interaction with media and politics during his career. He partnered with the Indian Congress Party but had a fall out with Rajiv Gandhi’s family after getting dragged into the Bofors drama. He partnered with Amar Singh but was hugely criticized for working with one of the most corrupt party representatives of the Samaj Vadi party. He has also been criticized for advertising for Gujarat’s tourism and cozying up with Prime Minister Narendra Modi.

It’s understandable that Mr. Bachchan wants to live out the remainder of his life without controversy. He wants to enjoy the fruit of his labor and forget the ills of the society and nasties humans sling at him. But sadly, only the privileged few have the option of living in such a bubble, and the entire Bollywood fraternity enjoys this privilege. As an admirer of the body of work and social standing Mr. Bachchan enjoys, I was hoping Mr. Bachchan recognizes this privilege rather than assuming it’s an entitlement reserved for a few.

Link to the interview: