“Who is God after all?” That is what an alien (portrayed by Bollywood megastar Aamir Khan) asks in the recently released Hindi movie PK (or Peekay). He innocuously explains, “There are two types of God. The first one created the Universe. He is loving, forgiving, omniscient, protective and unprejudiced. There is another God whom People created. He is forgetful, wrathful, prejudiced, and might punish you if you do not believe in Him or do certain things. The first God encourages love, while the other God feeds on fear.”

How right this alien is about our God. Entangled in the twisted concept of religion and our religious customs and traditions, we mortals have completely forgotten the first God. We have become god-fearing than god-loving. We do not want to displease God, and thus we behave according to the moral rules of our religion. There is nothing wrong in having some concern as to what consequences God might bring upon our lives if we disobey Him. Nevertheless, problem arises when we turn into blind religious adherents and start following the rules made by men (not God) who use God’s name to further their agenda. So blind we have become in our faith that we have completely forgotten that God would never want us to kill the innocents, suppress women or scam people in His name. This is what the movie PK is all about.

The character PK is an alien who has no vices. He has no name, wears no cloth, and speaks no language. When he lands in our planet Earth, his remote control is stolen. He cannot go back to his home without it. In his quest to find the device, he seeks for God because every human being he meets suggests that only God can help him find it. Finding God gets too confusing for PK as we humans have made the concept of God too complicated for aliens. He goes desperately from god to god, temple to church to mosque so God can return his device. He learns from the humans that only by pleasing God, he can get his remote control back. Things get chaotic for PK when he starts mixing different religious rituals and routines to please the Lord. He is an alien, so he cannot differentiate between Hindus, Muslims or Christians or a temple, a church or a mosque. Seeing Hindus offering and breaking a coconut in a temple, he does the same in a church. He is reprimanded by the Christians. Seeing Christians drinking wine in a church, he buys a bottle of wine and enters a mosque. He is nearly killed by the Muslims. He ends up thinking that God has a multiple personality disorder. As funny as this scene is in the movie, it has a very profound meaning that tradition that is sacred in one religion could be equally offensive in another religion. No wonder why we fight with each other justifying why our God is better than the others’. 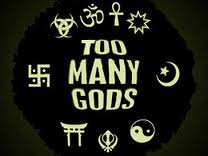 The movie does not shy away from stressing the commercialization and politicization of religion that is going on in the world today. PK meets several god-men, priests or prophets who claim to have spoken to God. These men tell PK to follow certain religious rituals to please the Lord . He blindly follows them, yet, he finds no success. PK innocently concludes that either God is misleading these men (he calls them God’s managers) or these men are not hearing what exactly God is saying. That is when he gives up his blind faith and starts challenging many rituals and customs we mortals blindly follow and reveals that God might not approve of whatever is going on in His name.   There is a scene when a concerned husband asks the god man (aptly played by the actor Saurabh Shukla) what he should do to cure his sick wife. The god man suggests that the man should visit the God (or a temple) which is several thousand miles away and offer his prayers and money there. PK asks the god man if he heard God’s message correctly because if God is our Father (as the god man claims), then how can a caring Father approve of this man (who is also God’s child) travel miles away instead of spending time with his dying wife and providing her the care and love that she needs. You will find several of such questions regarding God’s distorted messages in the movie.

But let us be clear that the movie is not against God or any religion. It is about what we god-fearing souls do in the name of God. Luckily the movie is not preachy either. It is directed by the noted director Raj Kumar Hirani, and he has done what he does the best – moralize his audience by using comedy. In his Munnabhai movies, he underlined the power of a warm hug (Jadoo ki Jhappi) and values of Mahatma Gandhi which we have long forgotten; in the movie 3 Idoits, Hirani urged the youngsters to follow their dreams and aspirations. In PK, Hirani has just questioned us about our relationship with God. Do we trust our God? Because if we trust Him (and trust comes with love not fear), then we do not need to entrap ourselves in all these blind superstitions to reach Him.

So friends, please do not miss the movie. You will laugh, you will cry, and when you come out of the theater you will possibly ask your soul the same question that PK asks throughout the movie, “Who is God after all?”

7 thoughts on “Movie Blog: What we can learn from Aamir Khan’s PK (PeeKay)”