Remember those five crazy sisters of the popular television sitcom Hum Paanch and their hapless father who found solace debating with a picture of his dead wife, a head-strong Shanti who fought for her and her mother’s rights, and several other independent, modern and career-driven women of popular soaps  such as Banegi Apni Baath and Tara in the 90s. Thanks to mighty TV producer Ekta Kapoor, as we entered the 21st century, Indian television saw the sudden popularity of ideal bahus (housewives) in those unimaginative storyline that projected stereotypical Indian family values. These ideal bahus changed everything about the portrayal of women in Indian television. Suddenly, “good” women are shown as someone deprived of any natural sense of ambition, desire and self-respect. For some reason, if a woman is modern, fashionable and ambitious, she is shown as loud, lurid and vile. Watch any serial, it always revolves around a Sita (read: an ideal woman), married to her Ram (read: an ideal man). Unfortunately, Sita has to suffer because of the plotting and scheming of a Suparnaka (read: an evil woman). Invariably, there are senseless misunderstandings between the couple, and they part ways. While they are separated, Ram is shown impregnating every Eena, Meena and Deeka, and Sita marrying and producing children from every Tom, Dick and Harry (I am not exaggerating, I actually read the plots of some of the popular shows before writing this blog). At the end there are so many children- now all adult characters-it is difficult to figure out who is who and who is doing what. Meanwhile, Sita has gone through several plastic surgeries, her name has changed from Sita to Gita to Mita (it does not even matter after a while), she is now a grandmother, yet, she does not have a single grey hair. She is still suffering for reason known to her only. It gets so ridiculously insane that her suffering has no intrinsic dignity and naturalness in that struggle.

Recently, when I was in a small town of Bihar, I heard a woman commenting, “If Bhabho can do this to her daughter-in-law, I can definitely do.” I am not sure what she was referring to but I was surprised to find that she was talking about a character of a popular show Diya and Baati Hum. I was deeply concerned realizing that Indian soap opera, being the most common genre on Indian television, could be social influencer for millions of women around the country. Data suggests that, Indian television reaches out to more than half of Indian households, and the television business is twice the bigger than the Indian film industry.

So popular Indian soaps are that they are uploaded online in no time, and there are several discussion forums where each episode or character is discussed in detail. Even though there has been no academic research about it, nonetheless, it is safer to assume that these TV characters do exert greater cultural influences. Thus it is concerning watching sadly regressive stereotypical portrayal of women who are doing nothing except plotting, scheming, bullying, fighting and suffering for no reason.

We are in the year 2014, yet, I could not find a single television show that shows a female protagonist who is a career-oriented woman. Even if a woman is shown with a career, the story focuses on her family issues in the most melodramatic fashion. As for example, one of the most popular shows Diya and Baati Hum shows a story of a daughter-in-law, Sandhya, who is from a middle-class family in a small town and dreams of becoming an Indian Police Service officer. With the support from her husband, she becomes a police officer. Yet, she has to prove again and again that she is capable of handling responsibilities of both her home and work together, at times, sacrificing her police duties for her household duties. After all, Sandhya, being an ideal Bahu, cannot be shown as a working woman neglecting her family for her professional ambitions.

Worse, what bothers me the most is television’s depiction of a woman having loose morals based on the clothes she wears. As for example, in another popular show Yeh Hain Mohabattein, the female protagonist, Ishitha, is a modern and independent woman and she is a dentist. Because she is an ideal bahu, she has to be wrapped up in flashy saree and gaudy makeup all the time- even when she is treating a patient, cooking in the kitchen or cleaning the house. At the same time, the female antagonist of the same show, who is a power hungry evil woman, is shown wearing corporate style “sleeveless blouse”. For some reason, all TV serials depict that an “ideal” woman stands for Indian values, and the “evil” woman is the epitome of western values.

I vaguely remember my mother watching a serial called Rajani in the 80s. It was about a middle-class housewife who raised voice against corruption. 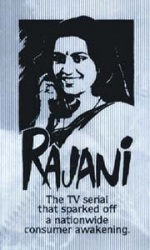 The show was extremely popular amongst middle class women at that time. To think that a feisty housewife, draped in the traditional saree, hair pulled back and a bindi on her forehead, was shown fighting the corrupt and inept civic system some 30 years ago, and today, television housewives in expensive sarees, and garish makeup, are indulging themselves in kitchen politics, scheming and bullying or “as ideal bahus” tolerating all sort of abuses- it is a sheer misfortune. Rajani’s problems were common everyday obstacles faced by thousands of ordinary middle class women. Today’s ideal bahus’ problems are so exaggerated and inflated that no ordinary middle class woman can relate to them. Yet, we are watching them and making them popular. It is high time that we as an audience evolve and refuse such negative portrayal of today’s women. At the same time, TV being a very influential medium, the makers of these daily soaps understand their social responsibility and revive the concepts, storyline and characters of women and show the real women and their real concerns.

4 thoughts on “Messed up ideal women of Indian television”