When Ms. Shwetha Menon was retracting her complaint against the Congress Party’s Member of Parliament (MP), Mr. Peethambara Kurup, she probably was cursing her own fate for accusing a politician of sexually harassing her. She might have forgotten that she is an Indian woman who should be prepared for any type of groping and pinching by any man – even if he is someone of her grandfather’s age, or a “revered” 72 year old public figure. She was probably not aware of the wrath of the public, which thinks that being a voluptuous and raunchy actress she deserves to be molested in public. More importantly, she probably forgot that when certain Indian men get horny, they can grope anyone, anywhere – even if the concerned woman is their chief guest at a public event. 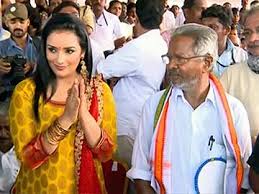 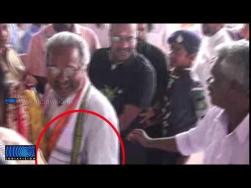 Alas! Ms. Menon learnt her lessons the hard way because within no time she decided to “forgive” her molester. Apparently he apologized and her father asked her to forgive him. I wish she had never withdrawn her appeal. But no one knows what went inside her private rooms when she was forced to retract it. Perhaps TV channel showing some Congress party youth burning her effigy in the streets scared her, or perhaps continuous pressure compelled her to change her mind and forgive Mr. Horny Congress-man. Or she probably did not expect public’s negative reaction who accused her of being opportunist. Men and women (yes women) accused her of being provocative enough to invite trouble even in such a public setting. Others made snarky remarks about how such a bold, path-breaking actresses can never “really” be molested. Some argued that she probably did all for money. Some argued about politics and elections. Someone else remarked, “If a woman goes in the crowd with so many men, touching can happen. It could be an innocent touch. I think now we should change the definition of sexual molestation.”

In other corners of the country, big powerful men from the Congress party stated “A woman who had filmed her childbirth cannot be considered a victim“. You’d think her film fraternity would show her consideration, but a film producer openly threatened saying that if she pursued the complaint, it would affect her film career.

It’s a country with varied opinions about her intentions in the whole fiasco. As I listen to all these conspiracy theories, I do wonder why no one is arguing about Mr. Kurup’s intention. Despite photographs and videos showing Kurup clearly touching her, is it not possible that the 72-year old went on to molest her in the broad daylight in a public event? Does Mr. Kurup not know that touching a woman in an inappropriate manner without her CONSENT is actually molestation? Does the idea of CONSENT not apply for women of Ms. Menon’s stature?

More importantly, is it not possible that Ms. Menon was actually telling the truth? Why do men always get the benefit of doubt, why don’t women?

Clearly the video shows Mr. Kurup trying to get too close with Ms. Menon during the event. Her body language clearly shows that she was not comfortable.  Her retracting her own complaint has now made the whole argument about sexual molestation a joke. She says she got the apology, Mr. Kurup denies he apologized because he never did anything wrong. Whatever the situation was, the case is closed now and in the next one week, everyone will move on (and who knows she will face the consequences of accusing a powerful politician)!

Our readers must be wondering why I am writing about this apparently dead case? As a woman, I want to salute Ms. Menon for her courage, and to tell her that I trust her. Being a celebrity and coming out in public stating she was molested takes extraordinary courage.  Though Ms. Menon has forgiven and forgotten today because of pressures I don’t fully know about but can comprehend, her case raises concerns that when a successful actress can be molested in broad daylight, imagine the plight of millions of women who leave their houses for work everyday.

It’s a sheer travesty that some people think that when a woman is claiming that she was molested, she is either lying or she is to be blamed for it. Of the concept of CONSENT is absolutely foreign to her accusers; people need to know that even if the concerned woman is a raunchy actress attending the event full of men, no man has a divine right to touch her without her EXPLICIT will.

Menon’s short-lived outburst does highlight an issue that it is never easy to be a woman in this country. Even if a woman dares to protest, there are enough voices to blame the woman herself. Worse, women themselves suspect the intention of the molested woman. Nonetheless, if this incident can help some of us women speak up against sexual molestation and support another woman – Ms. Menon’s in this cause, this whole so called tamasha was a worth it!