“His name will be in tomorrow morning’s newspapers – a man who rises fast, bites dust equally fast”, quips Nizamuddin Baig from Sultanpur outside Salman Khan’s Galaxy Apartments. For those of you who are unaware, Salman Khan a superstar and a do-gooder in his own right.  Salman is involved in raising funds for social causes through this charity – Being Human.

Salman also an arch rival of Shah Rukh Khan (aka SRK). It’s the kind of rivalry that’s pretty much unmatched in recent showbiz history and provides constant fodder for Indian newspapers and magazines. Salman supposedly lives with his family – 2 moms, 1 father, several brothers and sisters in a multi-storey, sea and park facing apartment.  The apartment exterior doesn’t look fancy but we hear the interior is nothing short of magic!

Galaxy Apartments Exterior
Anyway, back to the guy hurling insults at the guard outside Salman’s apartment. He traveled nearly 1,300 kms to ask Salman to sponsor his daughter’s wedding. Clearly Salman’s reputation of kindness precedes him. The guy was stopped by the guards – rightly so, and was asked to show proof of daughter’s marriage, ID proof and another long list of identifications. Well Nizamuddin Baig seemed poor and without the necessary documents.  So he in turn called the guards dirty names – specifically hired-caged-dogs.  Totally inappropriate, but in his defense, he felt Salman had betrayed him. Salman meanwhile surely was clueless about what was transpiring downstairs.

On a happier note, Nizamuddin Baig from Sultanpur was kinda happy he came to Mumbai to enjoy the wonderful sea breeze! 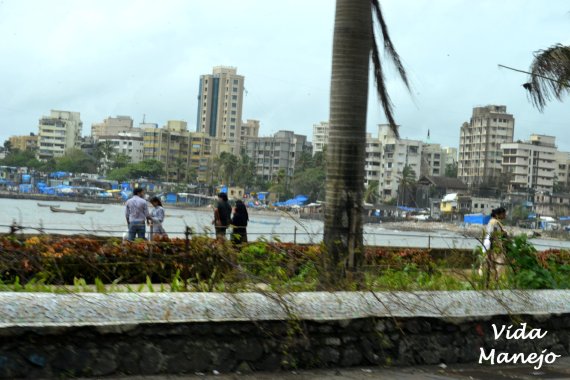 We couldn’t resist; we just have a few recommendations for the the Being Human site though – ads for Muslim Matrimony, random online shopping sites – BIG NO NO! Makes me question discretion of the website designer!